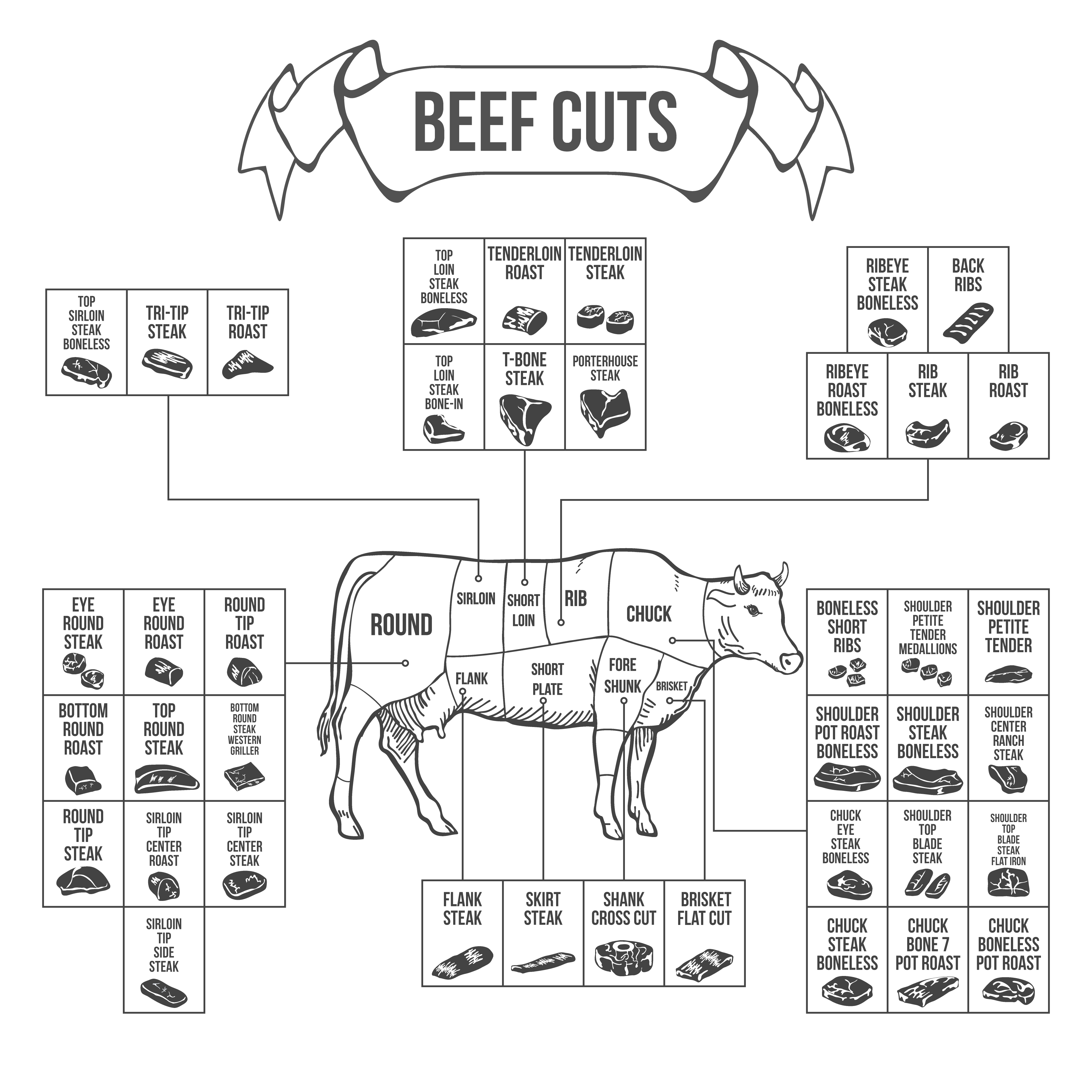 Did you know there are well over a dozen cuts of beef? From the head of the cow to its tail, you can find a cut designed for almost any method of cooking. For example, you’re best off roasting a chuck since it’s so tough, but a tenderloin requires no more than a little time on the grill.

Below, we’ll discuss where each of these cuts of beef come from, and we’ll throw in a few tips on cooking them. If you’re looking for a recommendation on a particular breed of beef (e.g. Angus, Kobe, etc.), check out our Certified Piedmontese beef.

In the US, we divide our cows into nine primal cuts, all of which are then divided into what we call sub-primal cuts. In this post, we’ll start with the front of the cow, move along its back to its rump, then work our way along its belly toward its front legs.

One of the toughest beef cuts on a cow, the chuck includes the neck, shoulder, and blade. From American burgers and English stews to Indian curries and Middle Eastern Kebabs, the chuck steak makes for an economical but flavor rich cut. If you’re not buying it ground, we definitely recommend braising, slow cooking, or stewing it.

Just behind the chuck, we come to the rib. Less tough than the neck and shoulders, the ribs, prime rib, and rib-eye taste delicious when seared (on a cast-iron skillet or barbecue) and baked in the oven.

A steakhouse favorite, the short loin produces some of the most tender cuts on the animal, including the coveted t-bone and porterhouse steaks. The tenderloin, which runs through the t-bone (toward the front) and porterhouse (toward the rear) can be cut into filet mignons. While perfect for a short grill or pan-fry with butter, you can also bake the tenderloin as in Beef Wellington.

The hind portion of the loin is less tender but more flavorful than the short loin. It’s divided into a top sirloin and a bottom sirloin (tri-tip). You’ll want to cook these on the barbecue.

As with the shoulder, the rear of the animal gets the most workout and therefore has less fat. These cuts are best slow cooked and kept wet.

This under section was historically a more affordable cut due to being a bit tough, but it’s become popular with the help of marinades and braises. It makes for some mean fajitas or a nice, traditional London broil.

Continuing forward, the plate, much like the flank, is a bit tough and usually gets ground up or prepared with a marinade. Still, it produces the skirt steak, short ribs, and even some pastrami.

The legs of the animal contain its toughest meat, so the shanks are really only good for soup or stew. For something a little tastier, check out our veal shank, Ossobuco recipe.

If you’re from Texas, you know just what to do with the breast of the cow. Season it and smoke it. When your done smoking the main body of the meat, throw a few pieces back in the smoker for some burnt ends, Kansas City style. Alternatively, if you’ve picked up our corned beef (which also comes from the brisket), check out our corned beef and cabbage recipe.

And that’s it. If you’re looking for some recipes for these delicious cuts of meat, check out our other posts.